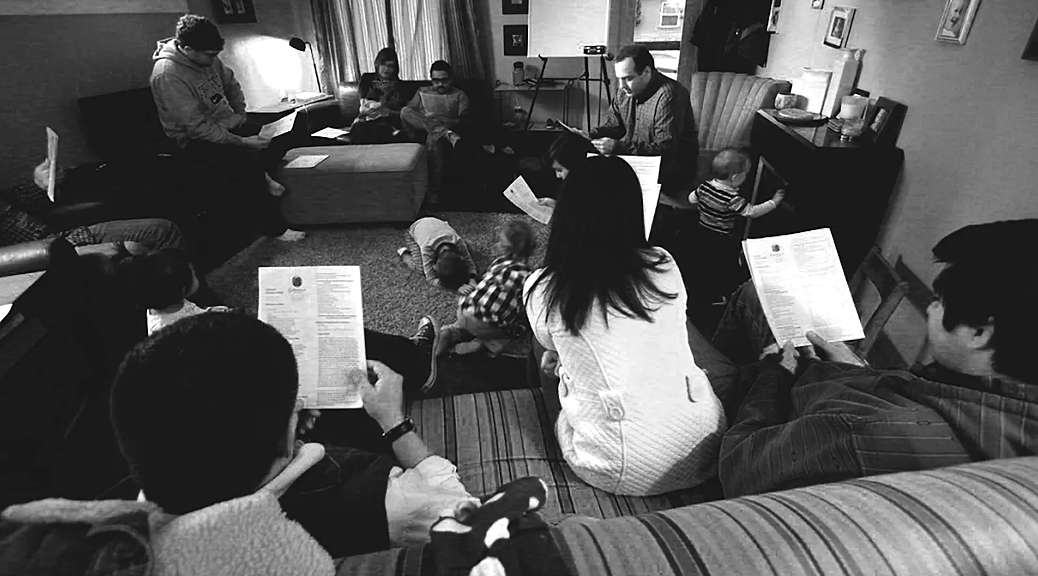 The Gospel is like a caged lion. It does not need to be defended, it simply needs to be let out of its cage – Charles Spurgeon

What Surgeon said is so true. But the problem is that we have caged the Gospel by institutionalizing it. We have added religion and our traditions to the brewing pot to create our own brand and flavor of Christianity. The only way for the Church to really make an impact in the world once again is for the Gospel to be uncaged, but this means that divisional walls needs to fall, disciples needs to be raised up again as sons and daughters of the Lord, and for the Church to return in Spirit and in truth to the Kingdom.

You can ask the following question: Why do so many churches bring the world into the church? It is not because it is safer and more convenient than bringing the Gospel into the world? After all, it takes effort to go out in order to share the Gospel. It means leaving our comfort zones.

House churches are the perfect environment to address the prevailing issues that have caged the Gospel, and that have caused an immobility and an almost spiritual paralysis among the servants of God. For within such an environment, God again takes the center as the main focus, and the Holy Spirit is allowed to move, as it should only in the Spirit of God can we move in the fullness of the Truth and the power of God. For man is never head of the Church, but only God. Within such an environment, there is room, opportunity and the means to disciple, to be a disciple and to move in one’s call and gifts. Thus to be the Church, and not just attend church.

Indeed, to let the Gospel out of the cage speaks of activation. It speaks of mobilization. It speaks of servants of God moving and doing, all the while following Jesus. Acts 10:30 speaks about “how God anointed Jesus of Nazareth with the Holy Ghost and with power, and how He went about doing good and healing all who were oppressed by the devil, for God was with Him.” Yes, Jesus was always active and mobile, bringing the Gospel, thus the manifestation of the Kingdom, to the people.

Unfortunately, over the last 2000 years, we have systematically erected more and more walls around the Gospel, caging it in, and so we have created denominational divisions, but we have also created separation in terms of class, race and between clergy and laity. Indeed, we are supposed to keep separated what God has divided but we are supposed to remain united what God has joined. Jesus has come to set the captives free but we have decided to enslave again through our legalisms, traditions and religious mind-set, thus creating a church that is still struggling to be free in order to deliver the world for bondage.

Acts 2, which speaks of vital church growth, shows how the disciples addressed these issues, and because they were united with God and each other, the Lord of the Harvest added to their numbers (it was not because of their clever sermons or programs that caused the growth). It says from verse 41 Then those who gladly received his word were baptized; and that day about three thousand souls were added to them. 42 And they continued steadfastly in the apostles’ doctrine and fellowship, in the breaking of bread, and in prayers. 43 Then fear came upon every soul, and many wonders and signs were done through the apostles. 44 Now all who believed were together, and had all things in common, 45 and sold their possessions and goods, and divided them among all, as anyone had need. 46 So continuing daily with one accord in the temple, and breaking bread from house to house, they ate their food with gladness and simplicity of heart, 47 praising God and having favor with all the people. And the Lord added to the church daily those who were being saved.”

On the first point, much has been written on the importance of unity. It says in “Psalm 133:1 Behold, how good and how pleasant it is for brethren to dwell together in unity!” Also in Acts 2, it speaks how “all who believed were together, and had all things in common”. Unity is key to revival. Unity is key to making an impact in the world. But it begins first with our unity with God, and then we shall be united among each other because of our unity in Christ. And were these disciples of Acts 2 truly united first with God and then each other? It says that “they continued steadfastly in the apostles’ doctrine and fellowship, in the breaking of bread, and in prayers.” The Apostle Paul also wrote in “1 Corinthians 12: 12 For as the body is one and has many members, but all the members of that one body, being many, are one body, so also is Christ. 13 For by one Spirit we were all baptized into one body—whether Jews or Greeks, whether slaves or free—and have all been made to drink into one Spirit. 14 For in fact the body is not one member but many.” While our traditions may divide us, which is human nature, we can may never be divided on the Gospel and the Truth and the Way of the Kingdom.

Secondly, we need to consider the sad reality that so many pastors and spiritual leaders have actually become inaccessible to the flock as shepherds. They are present on the pulpit and on the TV, but are they truly available to constantly meet and engage with the congregation? It may not be the case for all, for this is a gross generalization, but some of the bigger churches run as a hierarchy of leadership, where senior pastors remain so often distant and aloof from the masses. You therefore have to work with those in leadership in the lower ranks. In some institutionalized churches this is not the case and pastors are available in general, but are we really as accessible as Jesus was to the people? Jesus was constantly among the people, and He was constantly ministering, teaching, sharing, and caring. He was the true Good Shepherd of John 10, looking after the flock. In smaller groups, accessibility becomes easier and more flexible. One cannot imagine that the first disciples kept themselves distant from the masses, which clearly was not the case in Acts 2. The process of discipleship, mentoring, teaching and caring requires constant interaction and accessibility.

Thirdly, Jesus said to go and make disciples in the Great Commission. His command for the disciples, also underlined in Mark 16, is one of action, not one of stagnation and passivity. Disciples follow and they go. They are involved, interactive, ministering and sharing the Kingdom of God as the Lord leads. We read in “Luke 10: 1 After these things the Lord appointed seventy others also, and sent them two by two before His face into every city and place where He Himself was about to go. 2 Then He said to them, “The harvest truly is great, but the laborers are few; therefore pray the Lord of the harvest to send out laborers into His harvest. 3 Go your way; behold, I send you out as lambs among wolves.” More than ever we need disciples who will reach out to the lost, disciple, pray for the sick, cast out demons, pray for the baptism in the Holy Spirit and activate others to fulfill the great commission. This is mobilization and this is activation.

Fourthly, regarding association, it is important to surround yourself with those God has ordained to be on your path for they will lead you further in your mandate, and they shall ultimately edify, encourage, exhort, and enlighten you and you shall be open to correction and through such a holy and God ordained association there will be open accountability and the means to stay true to the Lord in Spirit and Truth. House churches indeed create such an environment. Sadly, many children of God are shipwrecking God’s purpose and plan in their lives because of their associations which are leading them astray that is causing a spiritual drain, that is causing the adopting of incorrect and unholy life patterns and behavior and that is causing them to ultimately lose sight of God’s mandate. For this reason, because they are not associated as God has ordained, they have not moved spiritually forward or upward for they are held back, held down, paralyzed, immobilized, and they are being led out of the will of the Lord. This lend again to unity, for those who are united in God shall be brought together in unity, and therefore wholesome and godly association from which springs forth life, edification, activation and discipleship.

Ultimately, and fifthly, what is so needed right now in the Body of Christ is accountability. For some time we have hidden behind doctrines of “not judging” and “do not touch God’s anointed” to justify wrongful actions, behavior and erroneous teachings. We are finding so many false prophets operating because there is a lack of accountability, and this is also the case for many pastors and spiritual leaders. Within a small group or house church, accountability is of absolute necessity, and everyone needs to be open to be corrected, rebuked (if needed), and encouraged and to be taught. We read for example in “1 Peter 5:5 – Likewise, ye younger, submit yourselves unto the elder. Yea, all [of you] be subject one to another, and be clothed with humility: for God resisteth the proud, and giveth grace to the humble.” And also “Proverbs 13:18 – Poverty and shame [shall be to] him that refuseth instruction: but he that regardeth reproof shall be honoured.” More than ever we need to be accountable towards each other in the Body of Christ for our actions, for this leads to greater unity.